"There is one quality more important than “know-how” – and we cannot accuse the United States of any undue amount of it. This is “know-what” by which we determine not only how to accomplish our purposes, but what our purposes are to be.”

"to render the total chemical and energy resources of the world, which are exclusively preoccupied in serving only 44% of humanity, adequate to the service of 100% of humanity, at higher standards of living and total enjoyment than any man has yet experienced.”

….. I decided to look at the world’s current electricity generation, country by country (205 of them) together with their current respective populations, in order to arrive at comparable available electricity figures on a per capita basis in the form of kWh/person-year [kWh/py].  Taking the current UK per capita level of 5546kWh/py upgraded to a desirable 7500 kWh/py as not too unreasonable a level approaching Bucky Fuller’s design definition, country by country the per capita energy levels are updated where necessary, in addition to adjusting notional expectations for the year 2100 from the current world population of  ~7 billion to the UN median estimate for 2100 of  ~9 billion.


Calculating the total annual requirement on the assumptions quoted, the 2100 world output would have to be  ~1,554 TW.

And the results for World and Regions:

While the region of Asia + Oceania contains China as well as India, the continent of Africa alone accounts for two-thirds of the necessary increase in the World's 2100 estimated electricity production. Which may explain Otto Edenhofer's statements referred to in my earlier post at http://cleanenergypundit.blogspot.co.uk/2011/10/west-is-facing-new-severe-recession.html.  See also: Chinese loans raise spectre of colonialism, The Times, 20 July 2012,  p.40. or Dambisa F Moyo: Winner Take All - China's Race for Resources and what it Means for the World, Basic Books, 2012

An illuminating view of the sheer enormity of Africa is shown by Diamandis & Kotler in their book Abundance: 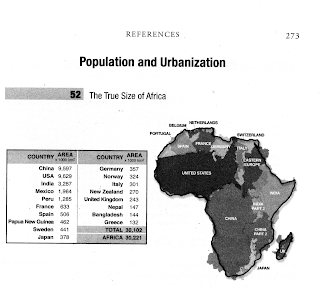 Hydroelectric electricity generation obviously uses water, but what is less often realized is that all other power stations are only gigantic steam engines also using water.  When looking at all their respective water requirements it becomes obvious that there is just no way that conventional power stations, however mixed, could ever satisfy 2100 world demand, as here calculated, on account of their water requirements alone.

Argonne National Laboratory, US Department of Energy, Environmental Science Division ANL.EVS/R-10/5: Water Use in the Development and Operation of Geothermal Power Plants, 2011 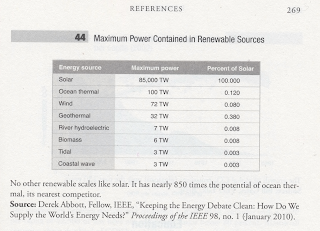