“CLIMATE CHANGE SCEPTICISM IS A SICKNESS THAT MUST BE TREATED”

As posted by Paul Joseph Watson [at http://www.infowars.com/climate-change-skepticism-a-sickness-that-must-be-treated-says-professor/ ] and further by Alan Caruba [at http://iceagenow.info/2012/04/utter-desperation-global-warmists/ ]

oooOOOooo
“Comparing skepticism of man-made global warming to racist beliefs, an Oregon-based professor of sociology and environmental studies has labelled doubts about anthropogenic climate change a “sickness” for which individuals need to be “treated”.

“Kari Norgaard, who is currently appearing at the ‘Planet Under Pressure’ conference in London, has presented a paper in which she argues that “cultural resistance” to accepting the premise that humans are responsible for climate change “must be recognized and treated” as an aberrant sociological behavior.

Norgaard equates skepticism of climate change alarmists – whose data is continually proven to be politicized, agenda driven and downright inaccurate – with racism, noting that overcoming such viewpoints poses a similar challenge “to racism or slavery in the U.S. South.”

“Professor Norgaard considers that fuzzy-studies academics such as herself must stand shoulder to shoulder with the actual real climate scientists who know some maths in an effort to change society and individuals for their own good. It’s not a new idea: trick-cyclists in Blighty and the US have lately called for a “science of communicating science” rather reminiscent of Isaac Asimov’s science-fictional “Psychohistory” discipline, able to predict and alter the behaviour of large populations,” reports the Register.  As Jurriaan Maessen documented yesterday, the ‘Planet Under Pressure’ confab at which Norgaard is appearing to push this insane drivel is nothing other than a strategy session for neo-eugenicists to hone their population control agenda.
A statement put out by the scientists behind the event calls for humans to be packed into denser cities (eco-gulags?) so that the rest of the planet can be surrendered to mother nature. It’s a similar idea to the nightmare ‘Planned-Opolis’ proposal put out by the Forum for the Future organization last year, in which human activity will be tightly regulated by a dictatorial technocracy in the name of saving the planet.
The mindset of this gaggle of arrogant, scoffing elitists in their drive to micro-manage the human race, which they regard as a plague on the earth, is best encapsulated by the following quote from ‘Planet Under Pressure’ attendee and Yale University professor Karen Seto.
“We certainly don’t want them (humans) strolling about the entire countryside. We want them to save land for nature by living closely [together],” Seto told MSNBC.
The effort to re-brand legitimate scientific dissent as a mental disorder that requires pharmacological or psychological treatment is a frightening glimpse into the Brave New World society climate change alarmists see themselves as ruling over.
Due to the fact that skepticism towards man-made global warming is running at an all time high, and with good reason, rather than admit they have lost the debate, climate change alarmists are instead advocating that their ideological opponents simply be drugged or brainwashed into compliance.
Norgaard’s effort to equate climate skepticism with racism as a disorder that requires “treatment” also serves as a reminder of the story we covered earlier this month about the establishment’s efforts to push the pharmaceutical heart drug Propranolol as a “cure” for racist thoughts.”

As a comment regarding the possible information content of any event occurring or of any statement corresponding to facts, I offer a couple of pages from my Sustainability Primer: 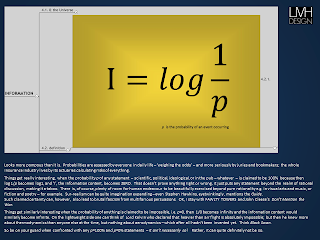 The caption reads:
Looks more pompous than it is.  Probabilities are assessed by everyone in daily life- ‘weighing the odds’ – and more seriously by juries and bookmakers;  the whole insurance industry lives by its actuaries calculating risks of everything.
Things get really interesting, when the probability of any statement – scientific, political, ideological, or in the – whatever – is claimed to be 100% because then log1/p becomes log1, and “I”,  the information content, becomes ZERO.  That doesn’t prove anything right or wrong, it just puts any statement beyond the realm of rational discussion, making it a taboo.  There is, of course, plenty of room for human endeavour to be beautifully exercised beyond pure rationality e.g. in visual arts and music, or fiction and poetry – for example.  Sur-realism can be quite imagination expanding – even Stephen Hawkings, eyetwinkingly, mentions the Guide.
Such claimed certainty can, however, also lead to brutal fascism from multifarious persuasions.  OK, I stay with FAWLTY TOWERS and John Cleese’s Don’t Mention the War.
Things get similarly interesting when the probability of anything is claimed to be impossible, i.e. p=0, then 1/0 becomes infinity and the information content would similarly become infinite.  On the lightweight side one can think of Lord Kelvin who declared that heavier than air flight is absolutely impossible;  but then he knew more about thermodynamics than anyone else at the time, but nothing about aerodynamics – which after all hadn’t been invented yet.  Think Black Swan.
So be on your guard when confronted with any p=100% and p=0% statement – it ain’t necessarily so!   Rather, it can quite definitely not be so.

One of the following pages illustrates: 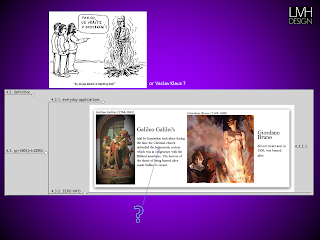 Much more on this and other fundamentals, in the Sustainability Primer, of course, at http://www.lmhdesign.co.uk/sustainability.php

See also
http://joannenova.com.au/2012/04/regulators-wet-dreams-of-controling-you/
and all still rational human beings should be very concerned about how we allowed ourselves to be governed by rulers advised exclusively by Lysenkoists paid for by …  for a good start see  http://joannenova.com.au/global-warming/
Posted by Unknown at 12:23