CLIMATE MODELS
There aren’t any.  Not one.  To make it easy, consider starting, say, with the beginning of the Common Era (CE): does anyone know of a computerised climate model that would list the influences and explain their interactions while playing through the waxing and waning of the Roman Warm Period, or its following Dark Ages Cold Period, or the Medieval Warm Period, in turn followed by the Little Ice Age – none of which could possibly have had any human made contribution.  With timespans in the order of half a millennium for some of these periods, now that’s Climate. A picture is worth a thousand words, perhaps: 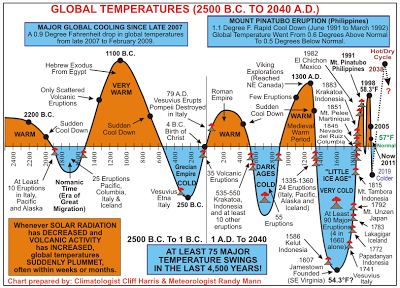 Only if and when we have such a model explain known Climate might we possibly know what, if any, difference to global climate the Watt, Otto and Diesel engines may have made when seen beside the other sources that obviously must have been – and still are – at work before these inventors’ machines and their offspring were widely employed.


Where are the RealClimate modellers?
Certainly not here: http://tinyurl.com/q4rtmvf

LYSENKOISM
“Lysenkoism, or Lysenko-Michurinism was the centralized political control exercised over genetics and agriculture by Trofim Lysenko and his followers. Lysenko was the director of the Soviet Lenin All-Union Academy of Agricultural Sciences. Lysenkoism began in the late 1920s and formally ended in 1964.
Lysenkoism was built on theories of the heritability of acquired characteristics that Lysenko named "Michurinism".[1] These theories depart from accepted evolutionary theory and Mendelian inheritance.
Lysenkoism is used metaphorically to describe the manipulation or distortion of the scientific process as a way to reach a predetermined conclusion as dictated by an ideological bias, often related to social or political objectives.[2
http://en.wikipedia.org/wiki/Lysenkoism

There is no great leap of imagination required to equate what I described in my blog post of 04 October 2011 with this definition of Lysenkoism, viz. “to describe the manipulation or distortion of the scientific process as a way to reach a predetermined conclusion as dictated by an ideological bias, often related to social or political objectives”, or Kyotoism, if you will.  I prefer Lysenkoism as it has become the descriptive term for any state, or similar political power-ordained exclusive adoption of predetermined conclusions, scientific or otherwise; from the Constantine invention of a single state religion, or the geocentric world view, or the current AGW variety.

“Blitzed in the polls, the Australian Labor Party have picked the communist solution — straight from the Soviet rule book of Free Speech.  Goskomizdat revived as a kind of Goskoshopfront. It’s more desperate and simplistic band-aid legislation to benefit the ruling class and not the people. Surprisingly, the media seems to be silent on this scandalous attack on free-speech.
The Gillard Government tells us the tax’s effect will be minimal, but they are clearly terrified of the blowback.
The Australian Competition and Consumer Commission (ACCC) has been directed to enforce accurate business promotions with a $1.1m dollar fine, and team of 23 “carbon cops”, to stop Australian businesses from posting any signs telling the public how much extra they are paying due to the Carbon Tax, or having a “Pretax sale”.  Imagine the travesty of transparently letting customers see a breakdown of their invoice, or of warning customers of price rises to come?”
http://joannenova.com.au/2011/11/the-tax-whose-name-shall-not-be-spoken/

How’s that for a Stalinesque enforcement of atonements for largely imagined indulgences!

Just how much this IPCC collection of CO2 tributes costs, is stated for the UK by Matt Ridley in his Angus Millar Lecture of the Royal Society of Arts Edinburgh, 31 October 2011:

As the Oxford dictionary tells me, an oxymoron is “a figure of speech or expressed idea in which apparently contradictory terms appear side by side…  stemming from the Greek oxumoros [meaning] ‘pointedly foolish’ “.

Renewable Energy is about as foolish and misleading an oxymoron as one could get:  if such energy were to exist, it would be the ultimate perpetuum mobile which, of course, is impossible to obtain anywhere in the whole universe according to the laws of thermodynamics, i.e. entropy won’t let you.

As Buckminster Fuller pointed out long ago, there are only two kinds of energy sources available to us: Income energy and Capital energy.  Living off Capital equates in energy terms with burning fossil fuels to extract their energy for our multifarious uses. Fossil fuels are certainly not ‘renewable’ at the rate we need to employ them (that includes biomass) and we could inevitably be heading for energy bankruptcy if there were no alternative. Income energy, in contrast, is inexhaustible and available anywhere on Earth – called Sunshine (and includes its first-order derivative: onshoreWind).  OK, that safe source of nuclear fusion will also burn out in a few billion years (barring astronomic Black Swans), but that’s practically eternal for present practical purposes and certainly beyond our grandchildren’s grandchildren's lifetimes.

So, how to measure progress?
How many kWh of affordable CleanEnergy will any technology provide?
appears the be the only question to answer.  And here is a reminder of the criteria constituting CleanEnergy: 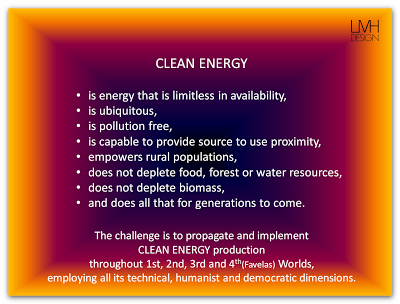 Where does it all come from?