Here updated to ‘…copying and distribution of literature banned by the AGW Gleichschaltung,’ with some recently found examples.  [1] [2] 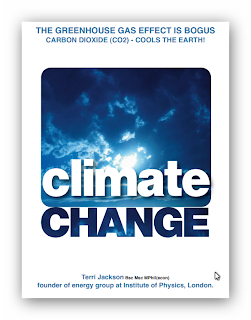 SCIENTIST FIRED BY UNIVERSITY FOR EXPOSING TRUTH ON CLIMATE FRAUD

Highly qualified and well-respected professor, academic teacher and climate scientist, Murry Salby has been performing important and groundbreaking research exposing myths about the so-called "settled science" around greenhouse gases and their impact on climate. Uniquely, his work is based solely on empirical evidence rather the dubious ideological whims of post-normal climate 'science'. Other leading researchers have validated his findings and, as such, Salby is now very much a thorn in the side of promoters of man-made global warming alarmism.

For simply pursuing the truth, as any good scientist should do, Salby has been fired by his employer, the University of Macquarie, Australia.

This is despite the fact Macquarie University had originally appointed Salby as their Chairman of Climate Science. He is a scientist of such repute that he has held visiting professorships at Paris, Stockholm, Jerusalem, and Kyoto, and he’s worked at the Bureau of Meterology in Australia.

Principia Scientific International (PSI) is so horrified and angered by the retaliation of pro-green anti-scientist administrators at Macquairie University that we have secured a generous donation from our publisher, Stairway Press, to sponsor Professor Salby's visit, if he agrees, to London in October to make a high profile public presentation of this attack on science.

As such, PSI and other supporters of traditional scientific methods will ensure this outrageous attack on an honorable researcher will be exposed at a key British climate science gathering.

Below is Professor Salby's outline of the backstory of his victimization proving that essential academic freedoms in Australia are being supplanted by unprincipled self-serving promoters of Big Green.

ON FIRST PRINCIPLES OF HEAT TRANSFER

How surreal climate concerns look when you examine modern assumptions ("the settled science") on the basis of first principles like conductive, convective and radiative heat transfer, specific heat (where water is king) and density.

Yes, my view of what factors influence the earth’s temperature is 180° from the consensus greenhouse theory.

In my view the earth’s surface can do nothing except heat the air that surrounds it and thus be cooled in turn. Yet the prevalent opinion is all about how air heats the surface. To me, this is surreal.

The following collection of quotations could be thought of as refuting the IPCC story of "back-radiation”.  But it’s mostly just a collection of what academic and engineering sources have to say about heat transfer, i.e., the conditions by which Body A is able to raise Body B’s temperature. Quite simply, if A is radiating 100 watts per square meter at B and B is radiating 50 at A, heat transfer follows a one-way path from A to B — B alone gets hotter and no "mutual heating" occurs.

So the assertion that A (the earth’s surface) gets hotter by thermally exciting B (IR-reactive gases) is a meaningless statement. Since the 2nd law prohibits this, "radiative forcing" by IR-reactive gases is entirely a product of imagination, a complete reversal of cause and effect.

Moreover, if the focus of earth’s temperature then turns to heat RETENTION rather than heat GAIN, the FIRST thing to investigate is a substance called water, which covers 70% of our planet, is 800 times denser than sea-level air, and is FAMOUS for retaining heat! Solids are roughly 2000 times more dense than air and so must also be considered.

RECYCLING OF HEAT IN THE ATMOSPHERE IS IMPOSSIBLE

Some diagrams on the Earth’s energy budget depicts an exchange of energy between the surface and the atmosphere and their subsystems considering each system as if they were blackbodies with emissivities and absorptivities of 100% [1, 2]

However, such “recycling” of heat by the atmosphere does not occur in the real world because of the causes that I will explain latter in this paper.

Few authors have avoided plotting such unreal recycling of heat and only show the percentages related to the flow of energy among systems and subsystems [3, 4]

We do know that serious science makes a clear distinction between heat and internal energy. However, we will not touch this abnormal definition of heat from those erroneous diagrams [1, 2] on the annual Earth’s energy budget.

The principal physical factor that inhibits the recycling of heat in the atmosphere is the degradation of the energy each time it is absorbed and emitted by any system [10].

The purpose of this essay is to demonstrate that some evaluations 1, 2 on the Earth’s annual energy budget are not considering the laws of basic physics and thermodynamics…..

1
CO2 Absorption Spectrum
There is no Valid Mechanism for CO2 Creating Global Warming.

Proof one: Laboratory measurements show that carbon dioxide absorbs to
extinction at its main peak in 10 meters under atmospheric conditions.* This means
there is no radiation left at those frequencies after 10 meters. If then humans
double their 3% input of CO2 into the atmosphere, the distance of absorption
reduces to 9.7m. A reduction in distance is not an increase in temperature.
Convectional currents stir the heat around removing any relevance for distance.
Scientists who promote the global warming hype try to work around this fact by
claiming something different happens higher in the atmosphere, which they claim
involves unsaturation. The difference due to height is that the absorption peaks get
smaller and sharper, so they separate from each other. Near the earth's surface, the
absorption peaks for water vapor partially overlap the absorption peaks for CO2.
Supposedly, in some obfuscated way, separating the peaks creates global warming.
There is no real logic to that claim. It is nothing but an attempt to salvage global
warming propaganda through obfuscation of complexities.
What it means is that climatologists admit there is no mechanism at lower
levels of the atmosphere, and their rationalization for higher up is phony.
It's important to realize that radiation from the sun does not greatly heat the
atmosphere, because the sun must give off high frequency radiation in the area of
visible light, which goes through the atmosphere. Something as hot as the sun
cannot give off low frequency radiation, called infrared. This means that the sun's
radiation heats the surface of the earth, and then the heat moves from the earth's
surface into the atmosphere through conduction, convection, evaporation and
infrared radiation. The infrared radiation can be absorbed by so-called greenhouse
gasses.

The Absorption Peaks
Carbon dioxide absorbs infrared radiation (IR) in three narrow bands of frequencies,
which are 2.7, 4.3 and 15 micrometers (µM). This means that most of the heat
producing radiation escapes it. About 8% of the available black body radiation is
picked up by these "fingerprint" frequencies of CO2.   …..

GLOBAL WARMING UN-FUNNELLED:  "That man-made fairy-tale, however, is nothing but the biggest political and intellectual fraud ever."  Not only IMHO, but so say voices from the IPPC themselves at
http://cleanenergypundit.blogspot.co.uk/2015/02/global-warming-un-funnelled-from-famous.html