Forgetting my pile of as-yet-to-read books, when Mark Zuckerberg published his books-to-read list – for example here at http://tinyurl.com/npy2smc – I was delighted to see Vaclav Smil being cited as the one author to read under the heading Energy. He has long been one of my heroes on this and many other subjects about which he has written (just check out his publications in Wikipedia here: http://tinyurl.com/q9onoy6 ). [1]

Of special interest is this advice in his ‘Energy at the Crossroads: Global Perspectives and Uncertainties’ [MIT Press 2003]:

“The fundamental reason why carbon dioxide abundance in the atmosphere is critically important to biology is that there is so little of it.
A field of corn growing in full sunlight in the middle of the day uses up all the carbon dioxide within a meter of the ground in about five minutes. If the air were not constantly stirred by convection currents and winds, the corn would not be able to grow.”

Since the first ‘space salad’ was now grown and eaten by the astronauts on the International Space Station (ISS), I wonder what concentration of CO2 was used in the first actual ‘glass house for food’ in Space, when even here on Earth glasshouse plant and food growers put additional CO2 into their greenhouses to avoid their plants withering because of CO2 starvation.

{ PS on 04 JAN 2016: As Tim Peake's first interview from the International Space Station makes clear [https://www.youtube.com/watch?v=GhzWTbe9WNc - at about 8 minutes in ] , the CO2 content of the ISS atmosphere is ten times that on Earth - to reduce fire risk - but plants obviously thrive on it }

In the US these natural laws are now, of course, superseded by a 2007 Lysenkoist edict from the Supreme Court declaring carbon dioxide a pollutant, and as a result it won’t be long until we see EPA staged Stalinesque show trials.  Lo and behold – here appears one in the making:

Returning to pollutants from burning any fuels – coal, oil, gas, wood etc –, the only pollutants given off are SOXs NOXs OBNOXs  -- sulphur oxides, nitrogen oxides, anything else ‘obnoxious’ incl carbon monoxide from incomplete combustion, and, of course, particulates (that is the ‘smoke’ that you actually can see – unlike carbon dioxide which is invisible, as are the most dangerous particulates of less than 2.5microns in diameter; think of asbestos)  -- all of which are the province of clean air legislation.

The Economist  of 15 August 2015 has drastic descriptions of the pollution problems in China:

“The capital’s “airpocalypse”, the choking smog that descended on Beijing in the winter of 2012-13, galvanised public opinion and spooked the government…

Responding to the outcry, the government set up a national air-reporting system which now has almost 1,000 monitoring stations, pumping out hourly reports on six pollutants, including sulphur dioxide, ozone and (the main culprit) particulate matter less than 2.5 microns in diameter, or PM2.5. These are tiny particles which lodge in the lungs and cause respiratory disease. The six are the main cause of local pollution but have little to do with climate change, since they do not include carbon dioxide, the main greenhouse gas…  [1]

Pollution is sky-high everywhere in China. Some 83% of Chinese are exposed to air that, in America, would be deemed by the Environmental Protection Agency either to be unhealthy or unhealthy for sensitive groups. Almost half the population of China experiences levels of PM2.5 that are above America’s highest threshold. That is even worse than the satellite data had suggested.
Berkeley Earth’s scientific director, Richard Muller, says breathing Beijing’s air is the equivalent of smoking almost 40 cigarettes a day and calculates that air pollution causes 1.6m deaths a year in China, or 17% of the total. A previous estimate, based on a study of pollution in the Huai river basin (which lies between the Yellow and Yangzi rivers), put the toll at 1.2m deaths a year—still high.” 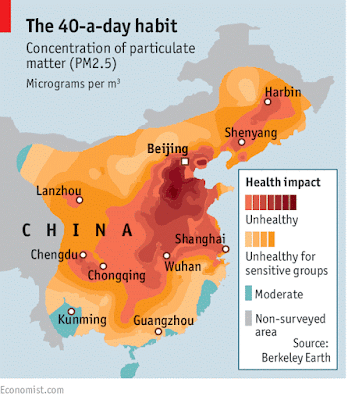 And here are some pictures from Space:  http://tinyurl.com/bbp4udl .

Telling as these descriptions, graphic and views from Space are – no mention of a single death or even illness caused by carbon dioxide is mentioned.  Yes, CO2 has killed people and livestock, as at Lake Nyos in Cameroon and elsewhere, see  http://tinyurl.com/cdk54sd , but not by being ‘poisonous’ but simply by swamping the local atmosphere with CO2 to such an extent that there was no oxygen left and deaths were caused by asphyxiation.

Coming back to books, Mark Zuckerberg mentions that Smil’s book is about ‘physical rather than social sciences.’ But I find that the longer I read up, and blog, on Clean Energy, that you cannot have CleanEnergy without CleanPolitics, not least in light of President Eisenhower’s admonition in his Farewell Address on 17 January 1961 “…the free university, historically the fountainhead of free ideas and scientific discovery has experienced a revolution in the conduct of research … [when] a government contract becomes virtually a substitute for intellectual curiosity.” Much the same admonition was expressed by Helmut Schmidt, the former German Chancellor, in his address to the Max-Planck-Gesellschaft on the occasion of its Centenary Ceremony on 11 January 2011 in Berlin, under the title ‘The Responsibility of Research in the 21st Century’.  More at:  http://tinyurl.com/p7p5tp6
[PS: now sadly IN MEMORIAM on learning of Helmut Schmidt's death today, 10 November 2015].
.

[NB:  I have never met Helmut Schmidt, but come to remember it,  I did meet President Eisenhower in the Oval Office in July 1953 as an American Field Service sponsored exchange student.]
.
In these respects, as addressed by Eisenhower and Schmidt, ‘social sciences’ are of no help – only some frank descriptions of political reality are needed. Some primers I found useful are

[1] notice the continued allusion to ‘climate change’, as if CO2 could possibly have anything to do with it – as stated by spokesmen of the IPCC themselves no less: http://tinyurl.com/q4rtmvf

In this respect, I am aghast also at what I read in Scientific American (September 2015 issue), where on page 7 under the heading Science Agenda by the Editors:

Opinion and analysis from the Scientific American Board of Editors:

“Then, as now, actions* were driven in large part by antiscientific opposition to evidence that global warming has a human trigger”
*in relation to the NASA Earth science budget allocation by the current administration.

I wonder what Martin Gardner would have had to say in his SCIENCE: GOOD BAD AND BOGUS when learning about this editorial board pontification of turning Scientific American into an oxymoron.

Not to be outdone, “This crime against future generations” blares an Opinion headline on page 24 in The Times of 15 August 2015, with a sub-head of “Earth’s fate depends on action now over climate change.  Our short-terminism stands in shameful contrast to our forebears”. Author being no less a person than Martin Rees – Lord Rees of Ludlow, Astronomer Royal, who also is on the Board of Advisors of Scientific American.

Methinks all these Nuremberg Meme Funnellers will have a lot to answer for – because
It ain’t necessarily so.    http://tinyurl.com/naexuho

http://joannenova.com.au/2015/08/a-disgrace-to-the-profession-the-worlds-scientists-own-words-on-mann-and-his-hockey-stick/#more-43948
The World's Scientists own words on Mann and his Hockey Stick

“Russia, too, is part of my Europe. Arguments about Russia’s place in (or outside of) Europe have been going on for centuries… I have never understood the Western reluctance of the Russian hesitancy to place the country unequivocally in Europe… its history, music, literature, engineering, and science make it quintessentially European.” p.93

“Russia has another strength in its intellectual capacity. The country has always had many highly creative scientists and engineers, whose fundamental contributions are generally unknown to the Western public. How many people watching a scanner toting up their groceries know that Russian physicists, together with their US colleagues, pioneered masers and lasers. (Nobel prices in physics were awarded to Nikolai Gennadievich Basov and Aleksandr Mikhailovich Prokhorov in 1964 and to Zhores Ivanovich Alferov in 2000.) How many people seeing the images of the US Air Force stealth planes know that this class of aircraft began with Piotr Iakovlevich Ufimtse’s (1962) equations for predicting the reflections of electromagnetic waves from surfaces?”

Why I do what I do is at 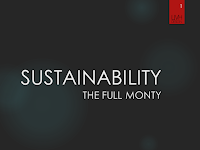 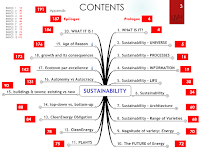 HOW TO BREAK THE CLIMATE DEADLOCK...

…either in accordance with this article in the December 2015 issue of Scientific American and its featured article which raises the question whether it is not only Lysenkoist – as we know from its support of the HockeySchtick – or whether Scientific American is now hell-bent to make an oxymoron of its title, when compared to the considerations expressed in the Idiot Guide to Global Warming  at http://tinyurl.com/qjxakew ?  You decide! 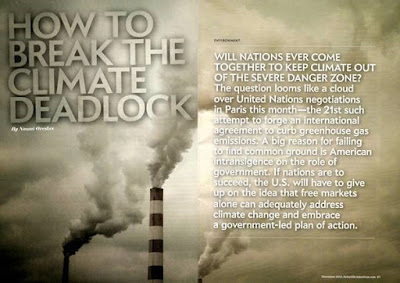