Possibly the most all-embracing WHODUNNIT ever written  -  and it wasn’t the Butler either. Definitely needs reading from start to finish – one long crescendo outperforming Ravel’s – with a virtuoso cadenza bound to generate a long reverberation-time embracing not only individual brains but diverse whole cultural fiefdoms. 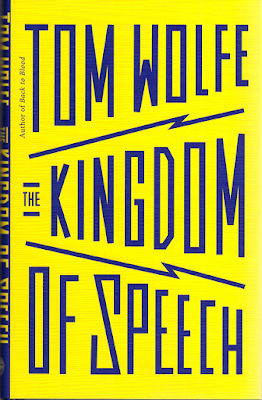 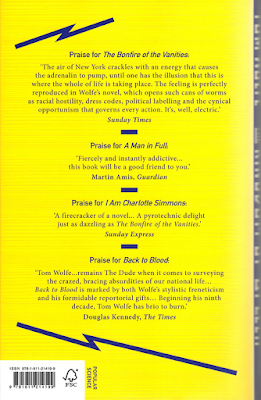 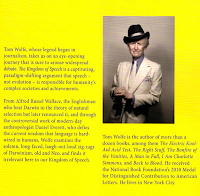 It occurred to me that a TYGER like Tom Wolfe might have a comment on Donald Trump – and found an interview in The American Spectator at http://spectator.org/65918_tom-wolfes-view-trump/  from which I would like to quote this part:

“If you go through our history, the strictly intellectual component of the presidency is not all that important. Just look at Reagan. He was a huge success. He was considered an idiot by half of the people in the political field.
2008
I remember Henry Kissinger was at a university once, holding a seminar for ten students and he didn’t know that his remarks were being recorded. And he said something like, “You know, when you first meet Reagan and you spend a half hour with him, you leave saying, ‘Oh my God, how could the future of the free world be dependent on such a stupid guy?’” But then Kissinger said, “And yet every move he makes is right.” Kissinger was horribly embarrassed when that came out. The point is that decision making is not necessarily an intellectual talent.

One of the stories about Reagan that I remember is the time he went to Germany to speak before the Berlin Wall. It was at the time when the Berlin Wall was still a big factor. And so Reagan had a discussion with his advisers about whether or not he should say that the “wall should come down.” And they said, “Oh, don’t say that,” and then told him what he should say instead. But when Reagan gave the speech, he said, “Mr. Gorbachev, tear down this wall,” and it was a real turning point in the Cold War. It was just Reagan’s gut reaction to the facts.”

This brought to mind something in relation to the fall of the Berlin Wall in 1989 which I recently mentioned in one of my blogs --  http://cleanenergypundit.blogspot.co.uk/2016/08/brexit-musings.html -- where I quote Vaclav Smil:

“Russia, too, is part of my Europe. Arguments about Russia’s place in (or outside of) Europe have been going on for centuries… I have never understood the Western reluctance of the Russian hesitancy to place the country unequivocally in Europe… its history, music, literature, engineering, and science make it quintessentially European.” p.93
Global Catastrophes and Trends [MIT Press, 2008]

in relation to which I found this comment by Noam Chomsky:

“The near-universal Western condemnation of Putin in­cludes citing the "emotional address" in which he complained bitterly that the U.S. and its allies had "cheated us again and again, made decisions behind our back, presenting us with completed facts. With the expansion of NATO in the East, with the deployment of military infrastructure at our borders. They always told us the same thing: 'Well, this doesn't in­volve you.'

Putin's complaints are factually accurate. When Presi­dent Gorbachev accepted the unification of Germany as part of NATO -- an astonishing concession in the light of history -- there was a quid pro quo. Washington agreed that NATO would not move "one inch eastward," referring to East Germany.

The promise was immediately broken, and when Gorbachev complained, he was instructed that it was only a verbal promise, so without force.
President Clinton proceeded to expand NATO much farther to the east, to Russia's borders. Today there are calls to extend NATO even to Ukraine, deep into the historic Rus­sian "neighbourhood." But it "doesn't involve" the Russians, because its responsibility to "uphold peace and stability" re­quires that American red lines are at Russia's borders”.
[Because We Say So, Hamish Hamilton, London, 2015]

“Whenever a theory appears to you as the only possible one, take this as a sign that you have neither understood the theory nor the problem which it was intended to solve”

being one of my ‘wooden-nickel-detectors’,
[cf. my comment in http://cleanenergypundit.blogspot.co.uk/2014/04/why-some-haveasked-what-it-actually-is.html ]

it is in relation to many other topics -- as in the Gorbachev reference – that Chomsky can be welcomed as a quite  perspicacious detector of wooden nickels.