What is Sustainability?  Nothing more than a complex concept found, using a Venn diagram, at the intersection of the three E’s of yet other complex concepts -- Environment, Equity, and Economy -- which form at their intersections three further complex concepts like viability between economy and environment, equitability of arrangements between society and economy, and bearable arrangements between society and the environment (i.e. what’s endurable by people as well as by nature over time). Only where the intersections between the three E’s themselves have become viable, equitable and endurable, can we find those ideas, actions, processes, materials, industries – in other words, the whole of human endeavour – coming together under the description deserving the name sustainable. 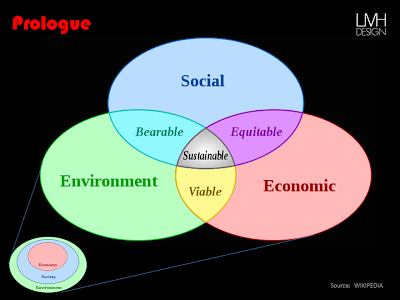 Seen in the light of such intricate logical connections emerging from a Venn diagram, the concept of sustainability is seen as a sound and deep idea underlying and touching on practically all aspects of life and civilization. This led me to adopting as a working definition:
Sustainability is the Grand Unifying Theory for finding the Ultimate Answers to Life, Universe and Everything -- and the answer remains not being 42.
If that sounds familiar, yes, it is taken from Douglas Adams’ “Hitchhiker’s Guide to the Galaxy” which also reminds us: ‘It is a mistake to think you can solve any major problems just with potatoes…’ which could apply to Venn diagrams when showing the essential logical relations, contain not enough detail for thorough understanding let alone plans of action.
Taking Sustainability as my central topic I used another aid to logic ( MindManager ) and arrived at an outline to make the Venn potatoes more digestible, so to say. The result is now available as an eBook from Lulu Press.

PS on 13 OCT 2015:      An  updated eBook titled SUSTAINABILITY - THE FULL MONTY is now available from Lulu Press, at http://www.lulu.com/spotlight/CleanEnergyPundit 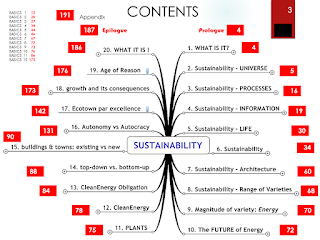