A further tribute to Hermann Scheer on the recent anniversary of his untimely death – he was named Hero for the Green Century by TIME Magazine, 2002 – may be this link to his GABA/MIT Lecture in California of 15 February 2007:


Clean Energy uses and associated considerations have already become so numerous in kind and number that I now post what I find significant on Facebook where I am ‘Mike Hohmann’.  This makes original reports as well as formats like videos and Ted Talks directly accessible.


For me, it is time to pursue one particular aspect of the use of Clean Energy, namely Communal Energy Autonomy which I regard as the most humane way to tackle the world energy shortage with speed and direct local democratic accountability as to the Who What Where When How such CIVIC ENERGY is effected with full transparency of costs while reaping all the economic and social benefits.


The CIVIC ENERGY concept is introduced on under the title of How to Build an Ecotown., published by Lulu Press:  http://www.lmhdesign.co.uk/sustainability.php and  http://lulu.com/spotlight/CleanEnergyPundit 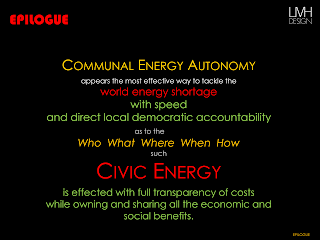 For a world catalogue of CivicEnergy = 100% Energy Autonomy see http://www.go100percent.org/cms/index.php?id=4

A step on the way was a small article in the Alt-Energy Magazine   http://www.altenergymag.com/emagazine/2011/02/octopus-diagrams-and-buckminster-fullers-design-challenge/1673

Best I can do is refer you Hermann Scheer's book, as posted four years ago:
http://cleanenergypundit.blogspot.co.uk/2012/09/at-risk-of-boring-you-i-must-quote.html