No, not my misspelling the title of the John Wayne classic  that somehow came to mind when recently prompted by a survey in the UK Renewable Energy Installer magazine to respond to the question: “Solar experts predict the UK could achieve PV grid parity as early as 2014. Do you agree – Yes/No?”   After I recorded my Yes, the poll return after 100 votes was 26% Ayes against 74% Noes.  I had expected more optimism. 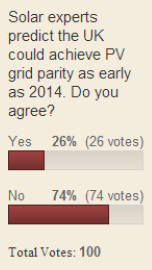 However, that survey question created some unrest among my grey matter and made me look closer at the meaning of grid parity.  Wikipedia (WP) was the usual starting point:

“Grid parity occurs when an alternative energy source can generate electricity at a levelized cost that is less than or equal to the price of purchasing power from the electricity grid. Reaching grid parity is considered to be an important point in the development of new sources of power. It is the point at which an alternative energy source becomes a contender for widespread development without subsidies or government support.The term is most commonly used when discussing renewable energy sources, notably solar power and wind power. It is widely believed that a wholesale shift in generation to these forms of energy will take place when they reach grid parity.”

Alternative energies in the UK, as elsewhere, are financially assisted to promote their adoption, most often by feed-in-tariffs (FITs). WP defines FITs http://en.wikipedia.org/wiki/Feed-in_tariff as  “… a policy mechanism designed to accelerate investment in renewable energy technologies. It achieves this by offering long-term contracts to renewable energy producers, typically based on the cost of generation of each technology.”

As to the funding of FITs, a UK web site http://www.fitariffs.co.uk/FITs/principles/funding/ makes things plain:

“The money doesn't come from the Government, but from the energy market…. Although the FITs are established in law, rather than coming from the government, the tariffs are actually paid by the energy suppliers… Where does the money come from?
It comes out of the pockets of the supply companies because they are really nice guys!
No seriously...
The suppliers pass on the cost of the Feed-In Tariffs scheme to all their electricity customers.
... so the bottom line is that people who don't install renewable energy systems pay for those who do!”

At the consumer end, this is obviously seen as making electricity more expensive; the undoubted general economic benefit, while far outweighing the cost of FITs, remains, however, less individually visible than electricity bills. FIT and similar schemes in various countries to engender renewable energy installations differ in method and kind, but I think all claim that they are not a subsidy (even the Court of European Justice said so about the German variety) since they are not funded out of general taxation income.  BTW, I detest phrases like ‘funded by the government’ which means nothing less than paid for out of our taxes.  But since FITs apply to all consumers of electricity (and who isn’t) they do amount to ‘taxation’ albeit  via an accounting system kept separate – by legislation – from general taxation so as to justify the notion that it ‘does not distort competition in a free market’.

Let me start by looking at the German situation which, being the widely accepted FIT model, is also the most realistically documented.  The German FIT for renewable energies (EEG is the acronym for the actual German law for it) is, of course, not the only kind of state enshrined support of energy creation, but provides a good starter to explain things.  The German situation looks like this: 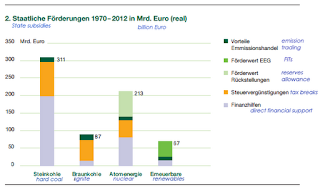 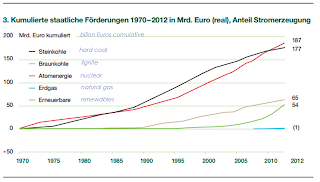 The cumulative total support of 54 billion Euros [100%] for renewables compares to the combined total of the other quoted sources of 429 billion Euros [794%].  The Greenpeace/BWE study estimates that for the total period of 1970-2012 renewables received, on average, support to the tune of 3.4 EuroCent/kWh (GBP 0.0275/kWh, USD 0.0438/kWh). I would be facile to say that non-renewables received, in round terms, eight times as much financial support as renewables, since unlike FITs, the non-renewable support does not all go for making electricity, nor would such a simplified approach reflect the respective amounts of electricity produced by their respective means.  Taking these considerations into account, the report estimates a total of 8.9 EuroCent/kWh (GBP 0.072/kWh, USD 0.115/kWh) as average subsidies for non-renewables over the period, or 262% of FITs.

So it appears that the question to be asked really should be:  “Could non-renewable energies ever achieve ‘grid parity’ with renewable sources, given a level accounting system?”

I have found nothing comparable to this German ‘The Real Cost of Energy’ report for other countries, but I am sure it is globally descriptive in principle. The US situation is usefully described in an article titled
‘The Federal Energy Subsidy Scorecard: How Renewables Stack Up’ available at http://www.renewableenergyworld.com/rea/news/article/2009/11/the-federal-energy-subsidy-scorecard-how-renewables-stack-up
from which I would like to quote:

“How Do Subsidies for Renewables Rank?
Evaluating federal energy subsidies is something akin to alchemy. The myriad of ways in which
they are funded, managed, and monitored, and year-to-year changes in legislation and
budgets make an exact accounting difficult. This said, the Environmental Law Institute (ELI)
recently completed a study for the period 2002 through 2008 in conjunction with the Woodrow
Wilson International Center for Scholars which, coupled with the MISI study, illuminates how
federal energy subsidies affect renewables and other competing fuels.
These studies confirm conventional wisdom that fossil fuels have been the primary beneficiary
of federal energy subsidies. Oil and gas garnered 60 percent of an estimated total of $725
billion in federal assistance between 1950 and 2003, with oil alone taking 46% of the total.
Coal took 13 percent. Next was hydroelectric at 11 percent and nuclear at 9 percent, not
counting the liability cap subsidy which is an implicit avoided cost and impossible to quantify. At
the back of the pack are wind, solar, geothermal, and bio-fuels, recipients of only 6 percent of
total energy sector spending during this period.
Given the recent vintage of renewable technologies, use of a 1950 baseline for breaking down
how federal energy subsidies have been parceled out may not paint a fair picture. However,
the more recent 2002 – 2008 period continues to show fossil fuels as dominant. According to
ELI, subsidies to fossil fuels totaled $72 billion, with most going to oil and then gas.
Support for coal-carbon capture and storage received $2.3 billion of this total. Fossil fuels took
almost two-and-a-half times more in subsidies than renewables, which received $29 billion.
Furthermore of this $29 billion, $16.8 billion went to corn-based ethanol whose climate friendly
credentials are increasingly open to question.
Only $12.2 billion, or 16.6 percent of what fossil fuels received went for wind, solar,
geothermal, hydropower, and non-corn based biofuels and biomass. This is better than in
preceding years but much less than what is needed in the face of global warming, a point
understated by ELI Senior Attorney John Pendergrass when he introduced the ELI study’s
results by saying “These figures raise the pressing question of whether scarce government
funds might be better allocated to move the United States towards a low-carbon economy.”

That is a ratio of 5:1 in favour of fossil fuel subsidies over renewables – not much different to the German ratio of 8:1 when counting, as in the US example, all uses of energy and not only electricity generation.

A special mention must be made of nuclear energy for electricity generation.  Both the German and US examples quoted compare only direct fiscal subsidies.  There are, of course, additional ‘subsidies’ for nuclear energy.

Nuclear power has never been safe, and never will be, it appears – their risks just cannot be insured. The Times [09.09.09.] reports a notional Public Liability premium cover requirement of £620 million per power station, any excess falling on the taxpayer in addition to risks from waste storage and health and life losses. The world’s largest re-insurance company – Munich Re – is reported [oekonews.at / sonnenseite.de, 23.03.11] to have declared that it is impossible to say how high an insurance premium should be in the absence of state guarantees, because there is no known modelling method on which to base a risk assessment.

And then there is the unresolved (unresolvable?) problem of what to do with nuclear waste.  A short summary by, of course, Wikipedia will suffice here:

“The use of nuclear technology requires a radioactive fuel. Uranium ore is present in the ground at relatively low concentrations and mined in 19 countries.[2] This mined uranium is used to fuel energy-generating nuclear reactors with fissionableuranium-238 which generates heat that is ultimately used to power turbines to generate electricity.[3]
Nuclear power provides about 6% of the world's energy and 13–14% of the world's electricity.[4] The expense of the nuclear industry remains predominantly reliant on subsidies and indirect insurance subsidies to continue.[5][6] Nuclear energy production is associated with potentially dangerous radioactive contamination as it relies upon unstable elements. In particular, nuclear power facilities produce about 200,000 metric tons of low and intermediate level waste (LILW) and 10,000 metric tons of high level waste (HLW) (including spent fuel designated as waste) each year worldwide.[7]
The use of nuclear fuel and the high-level radioactive waste the nuclear industry generates is highly hazardous to people and wildlife. Radiocontaminants in the environment can enter the food chain and become bioaccumulated.[8] Internal or external exposure can cause mutagenic DNA breakage producing teratogenic generational birth defects, cancers and other damage. The United Nations (UNSCEAR) estimated in 2008 that average annual human radiation exposure includes 0.01 mSv (milli-Sievert) from the legacy of past atmospheric nuclear testing plus the Chernobyl disaster and the nuclear fuel cycle, along with 2.0 mSv from natural radioisotopes and 0.4 mSv from cosmic rays; all exposures vary by location.[9] Some radioisotopes in nuclear waste emit harmful radiation for the prolonged period of 4.5 billion years or more,[10] and storage has risks of containment. The storage of waste, health implications and dangers of radioactive fuel continue to be a topic of debate, resulting in a controversial and unresolved industry.”

A specific example comes from an article in Clean Technica  news, at
http://cleantechnica.com/2012/11/08/nuclear-waste-storage-facilities-intolerable/#f6v2Gkb8kaWmLJZm.99

“Nuclear waste stored in run-down facilities poses an “intolerable risk;” long-term planning has faced “historic neglect” and decommissioning costs have spiralled out of control.
That’s the damning conclusion of a report by the National Audit Office into the Sellafield nuclear power station, the largest and oldest in the UK.

…Nearly 20 million gallons of nuclear waste are stored on the site in ponds and silos for the 50-year period needed for nuclear waste to cool down. Many of these are themselves over 50 years old and have “deteriorated so much that their contents pose significant risks to people and the environment”.
There have been many plans to improve the facilities, the latest of which came to a halt last year because it was “unrealistic,” with 85% of the improvements attempted failing to achieve what they were meant to achieve.

…The estimated cost of decommissioning the entire site by 2120 has risen by over 40% in just 3 years, and currently stands at $107 billion.”

There currently are 19 operational nuclear power plants in the UK (another eight are planned to be built by 2025).  World-wide there are 435 plants in operation  (62 under construction, and more planned). That makes multitrillion dollars just for intermediate waste storage (never mind the long-term problem for anything between 10,000 and millions of years).

The world’s nuclear power plants produce a net output of 370,003 MW. Considering that 3.2 litre of clean water are needed for every kWh produced … but I leave that to you to figure out the implications in an idle moment.

Photovoltaics might be said to have achieved true-grid parity with fossils and nuclear ever since Becquerel first observed it in 1839; and wind since a few thousand years earlier.

And those two energy sources – PV and onshore wind – are the only renewables that satisfy all criteria for ranking as Clean Energy (and the hydrogen/fuel cell combination will no doubt solve all intermittency problems and provide all fuel needs): 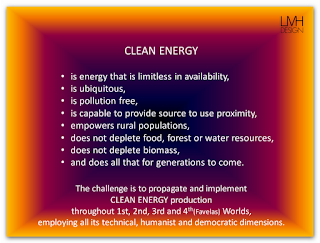 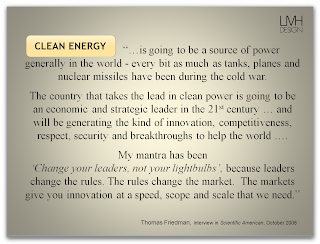 The WORLD DESIGN PROBLEM: DEFINITION, TIME FRAME AND METHOD
is at http://www.lmhdesign.co.uk/planet.php

As to WHY and HOW, some suggestions are at
http://lulu.com/spotlight/CleanEnergyPundit
Posted by Unknown at 15:39