WHO FUNDS THE EUROPEAN SCIENCE FOUNDATION?

Who funds the European Science Foundation?

US Senate Committee
reveals questionable influence from an environmentally active
Club of Billionaires.

[This is my translation of the largely German newsletter by Kalte Sonne. http://www.kaltesonne.de/?p=20772
Quotations in italics are direct copies of the English originals.]

Climate realism in Germany depends largely on volunteers. Activists for Kalte Sonne, EIKE, Notrickszone, ScienceSkepticalBlog and other groups give much of their time to this direly needed service, driven by much civil courage. One issue becomes clearer day by day: a whole branch of science has obviously departed from the real world, tempted by financial inducements, career prospects, political influence and prestige. Climate activists are similarly well funded. The PIK-Institut [Potsdam Institute for Climate-research] has a separate public relations department to spread its alarmist news far and wide. The climate activist platform “Klimaretter” [‘Climatesaviours’  http://www.klimaretter.info/] asks its viewers for regular donations to fund its IPCC inspired authors.

The Republican members of the US Senate Environment and Public Works Committee (EPW) have published, at the end of July 2014, the results of their investigation into the funding streams of the extreme left-wing environment movement. The result is deeply distressing:  supposedly independent environment organisations turned out to be billionaire-directed marionettes. Additionally, large public funds were channelled into activist groups. Similar to the German situation, the US federal environment administration is astonishingly close linked to the extreme left-wing environment movement. 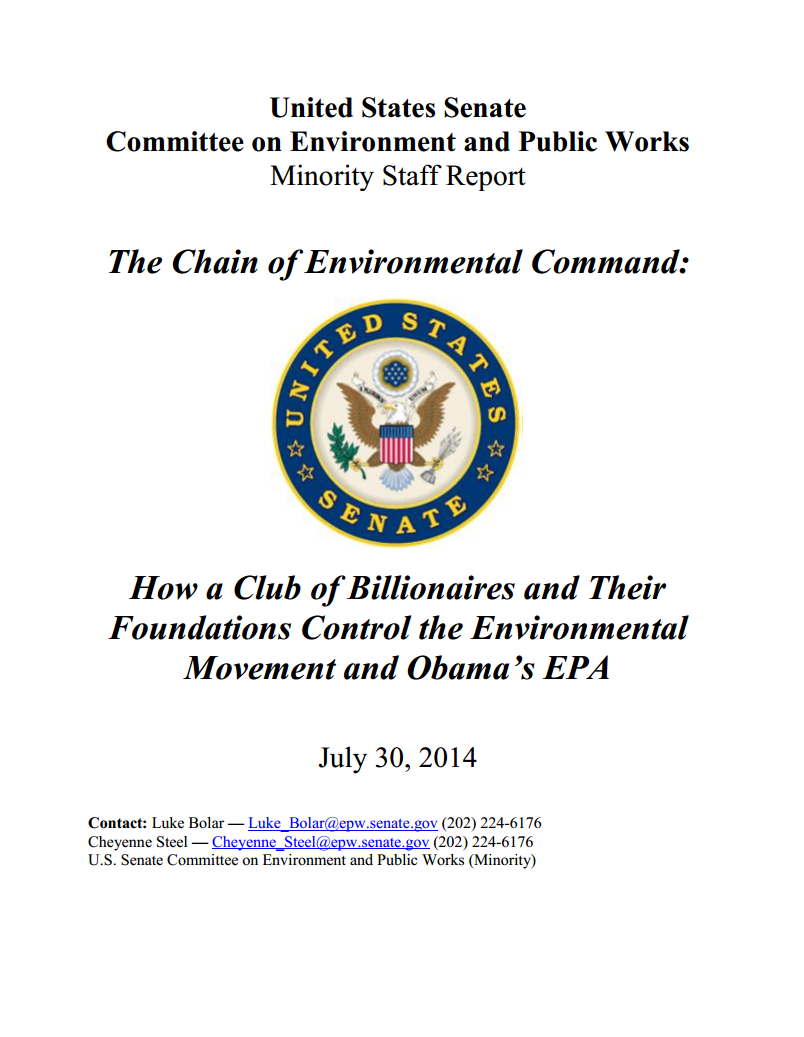 Some excerpts from the Press Release:

The Chain of Environmental Command
Key points from the report:

• The “Billionaire’s Club,” an exclusive group of wealthy individuals, directs the far-left environmental movement. The members of this elite liberal club funnel their fortunes through private foundations to execute their personal political agenda, which is centered around restricting the use of fossil fuels in the United States.

• Public charities attempt to provide the maximum amount of control to their donors through fiscal sponsorships, which are a legally suspect innovation unique to the left, whereby the charity essentially sells its nonprofit status to a group for a fee.

• Public charity activist groups discussed in this report propagate the false notion that they are independent, citizen-funded groups working altruistically. In reality, they work in tandem with wealthy donors to maximize the value of the donors’ tax deductible donations and leverage their combined resources to influence elections and policy outcomes, with a focus on the EPA.

• Environmental Grantmakers Association (EGA) is a place where wealthy donors meet and coordinate the distribution of grants to advance the environmental movement. It is a secretive organization, refusing to disclose their membership list to Congress.

• The Obama Administration has installed an audacious green-revolving door among senior officials at EPA, which has become a valuable asset for the environmental movement and its wealthy donors.

• Former environmentalists working at EPA funnel government money through grants to their former employers and colleagues.

• Under President Obama, EPA has given more than $27 million in taxpayer-funded grants to major environmental groups. Notably, the Natural Resources Defense Council and Environmental Defense Fund – two key activists groups with significant ties to senior EPA officials – have collected more than $1 million in funding each.

• EPA also gives grants to lesser-known groups. For example, the Louisiana Bucket Brigade received hundreds of thousands of grants under former Administrator Lisa Jackson despite challenges by state regulators over the use of such grants.

• In New York and Colorado, a pseudo grassroots effort to attack hydraulic fracturing has germinated from massive amounts of funding by the NY-based Park Foundation, as well as CA-based Schmidt Family Foundation and Tides Foundation.

• Bold Nebraska is another example of faux grassroots where a purportedly local organization is, in fact, an arm of the Billionaire’s Club. It is a shield for wealthy and distant non-Nebraskan interests who seek to advance a political agenda without drawing attention to the fact that they have little connection to the state.

• The circumstances surrounding the flow of money from 501(c)(3) and 501(c)(4) groups, and the likelihood of lax oversight, raises questions as to whether 501(c)(3) nonprofit foundations and charities are indirectly funding political activities.

• 501(c)(4) Green Tech Action Fund receives millions of dollars from green 501(c)(3) organizations, then distributes the funds to other 501(c)(4) groups that donate to political campaigns.

In Europe, the extreme left-wing climate movement is directed by the European Climate Foundation (ECF). According to its own annual report [http://europeanclimate.org/wp-content/uploads/2014/04/ECF-2013-annual-report-web.pdf ], p.42, the ECF in 2013 had 23.2million Euro at its disposal, of which 15.3millinon Euro were spent on activists and projects. Where on earth are such sums coming from?  The annual budget of this KalteSonne newsletter amounts to 25 Euro; in other words, the ECF has about one million times more money for its activism than our blog.

ECF names six main sponsors for the year 2013: The Children’s Investment Fund Foundation, ClimateWorks Foundation, McCall Macbain Foundation, Oak Foundation, Velux Fonden und die Nationale Postcode Loterij. For a large part, this sounds rather American. So let’s have a closer look at the EPW report where we find on page 47:

In the US, the ‘Energy Foundation’ serves as a money collection and transmission vehicle. Billionaires control smaller foundations, which pump funds into the Foundation, from where they are forwarded to fund activist projects. On the old continent, the European Climate Foundation was created mirroring the US set-up. Three US foundations are active in ECF as main sponsors, namely ClimateWorks Foundation, Children’s Investment Fund Foundation and Oak Foundation. It becomes obvious, that emanating from the US, a world-wide network of climate activists is to be established with which to steer global energy policy.

Where do these plentiful ECF funds actually end up?  The ECF website provides this information:

WWF is known as one of the most problematic activists in IPCC climate reporting, because WWF has managed in the past to place many of its activists in IPCC teams of authors. Instead of openly reporting on scientific facts, the WWF team were mainly concerned to create a smokescreen of dangerous scenarios with which to hammer home their aim to further the elimination of hydrocarbon energy sources. The Canadian journalist Donna Lafromboise described the extent of the IPCC infiltration by environment activists in an article for the Wall Street Journal http://online.wsj.com/news/articles/SB10001424127887323981304579079030750537994 in Septmeber 2013:

The problem is that numerous IPCC personnel have ties to environmental groups, many of which raise funds by hyping the alleged dangers of climate change. This relationship raises a legitimate question about their objectivity. The examples are legion. Donald Wuebbles, one of the two leaders of the introductory first chapter of the Working Group 1 report (a draft of which may be released next Monday), has been writing awareness-raising climate change reports for the activist Union of Concerned Scientists for a decade. Another chapter of the full IPCC report, “Open Oceans,” is led by Australian marine biologist Ove Hoegh-Guldberg, who has written a string of reports with titles such as “Pacific in Peril” for Greenpeace and the World Wildlife Fund (WWF). Astrophysicist Michael Oppenheimer, in charge of another chapter of the IPCC report, “Emergent Risks and Key Vulnerabilities,” advises the Environmental Defense Fund (after having spent more than two decades on its payroll). University of Maryland scientist Richard Moss is a former fulltime WWF vice president, while Jennifer Morgan used to be the WWF’s chief climate change spokesperson. Both are currently IPCC review editors—a position that’s supposed to ensure that feedback from IPCC external reviewers is addressed in an even-handed manner. My own examination of the 2007 IPCC report found that two-thirds of its 44 chapters included at least one individual with ties to the WWF. Some were former or current employees, others were members of a WWF advisory panel whose purpose is to heighten the public’s sense of urgency around climate change.

In other words, the ECF also supports these dubious activities, when the actual task of the IPCC is to provide a neutral scientific description and assessment free from political viewpoints. No wonder that projects at the Potsdam PIK-Institute were also supported by the ECF, as can be seen at their Förderliste https://www.pik-potsdam.de/forschung/klimawirkung-vulnerabilitat/projekte/dm-rd2/externally-funded-projects/completed .

It appears that the ECF is not really interested in a strictly scientific assessment of the climate conundrum.  If it were otherwise, this foundation would long have contacted  us at the Kalte-Sonne-Team to inquire about support for research projects concerning natural climate influences, like ocean cycles and solar activity fluctuations.

WHO SIGNED THE CLIMATE DECLARATION?
http://nofrakkingconsensus.com/2014/09/22/who-signed-the-climate-declaration/
Posted by Unknown at 18:55