Following on the heels of my last post, introducing David Archibald's latest book Twilight of Abundance - why life in the 21st century will be nasty, brutish and short, I was reminded of Peter Diamandis' Abundance - the Future is better than you think, which I posted in May 2012 at http://cleanenergypundit.blogspot.co.uk/2012/05/if-you-are-at-all-interested-in-energy.html,  with its video link https://www.youtube.com/watch?v=g1NJ9Vv-Y6Q&feature=plcp , 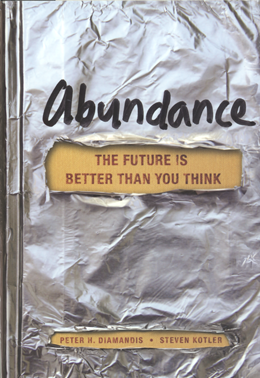 by this circular letter by Peter Diamandis, which I quote in full as received:

While the growth of solar may seem slow to some, it's fair to say it's in the midst of its "deceptive phase," on the road to disruption.

For example, a 30 percent increase in solar energy production per year, means 1 percent today grows to 1.3 percent in 3 years.

It also means that in 20 years (7 doublings), we'll see a 128-fold increase.
Either way, if Ray and Elon are even close, there is a trillion dollars up for grabs (as well as the future of our planet), and the future is bright.

Let's take a closer look at the converging technologies driving this future...

The first and most important technological change is the falling cost per watt of silicon photovoltaic cells over the past few decades.
Check out the plummeting cost from $76 in 1977, to less than $0.36 today. 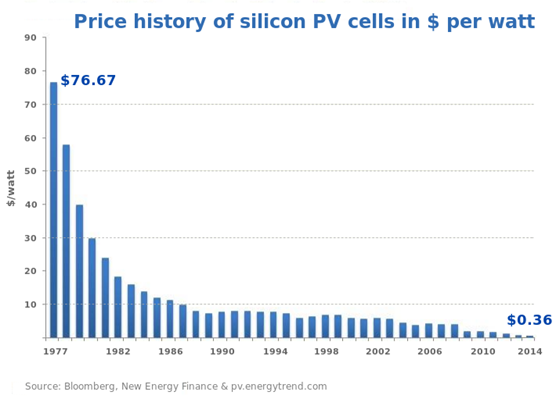 The International Energy Agency predicts that we will produce 662 GigaWatts of solar energy by 2035 following a $1.3 trillion investment in this area, but frankly this estimate is "highly conservative."
The second technology at play is satellite-Earth imaging, which enables companies like solar City to make rapid and accurate decisions on solar panel installations.
These days, an installer can check out your rooftop on Google Earth and determine in minutes if you are a good candidate. Super-simple.


The third key technology transforming our energy economy is battery storage.
The ability to take solar energy captured during the day, and time-shift it into the night.
Here to the change has been very significant, with a 50%+ reduction over the past four years, and an additional 50%+ reduction by 2020. 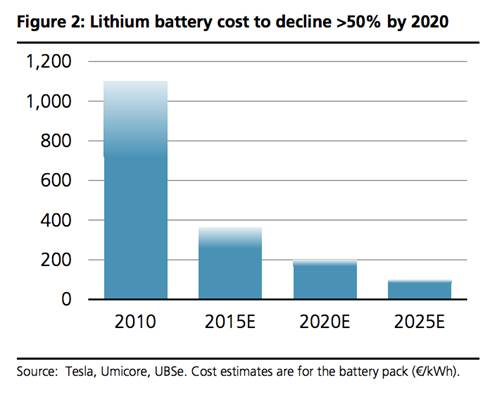 In addition to this ongoing cost reduction, we're about to see a massive increase in battery production.
Tesla's Giga-factory alone will produce 35 Gigawatts worth of the batteries by 2020, more than 2013's total global battery production capacity.

Tesla's Gigafactory also supports the production of 500,000 electric vehicles per year.
The rapid rise (see below) of Electric Vehicle (EV) production will play a critical role as well. 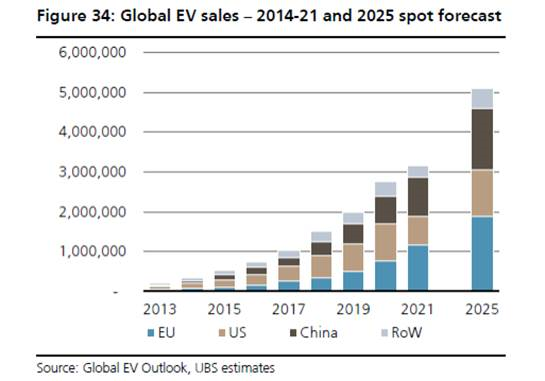 As the number of EVs increases, so too will the availability of batteries sitting in your driveway.
These will, in turn, provide a distributed network of storage capacity able to regulate, allocate, and conserve energy collected from the sun during the day.


The convergence of solar, batteries and EVs will democratize energy production and offer billions of people access to cheap, carbon-neutral energy.
Looking at solar energy thru my 6 Ds paradigm of exponential technologies may offer some added insights:

UBS continues: "By 2025, everybody will be able to produce and store power. And it will be green and cost competitive, i.e., not more expensive or even cheaper than buying power from utilities. It is also the most efficient way to produce power where it is consumed, because transmission losses will be minimized. Power will no longer be something that is consumed in a 'dumb' way. Homes and grids will be smart, aligning the demand profile with supply from (volatile) renewables."

UBS predicts the payback time for unsubsidized investment in electric vehicles plus battery storage plus rooftop solar will be around 6 to 8 years by 2020 (see below).

From my perspective, solar must be considered a central driver for our future economy.
How will this affect your business? Industry? Life? If this area is of interest to you, I have put together a mastermind of CEOs, executives, entrepreneurs, and forward-thinkers called Abundance 360 who meet on a regular basis to learn, debate and share these types of ideas. If interested, you can apply here.

P.S. Each week, I write a blog on exciting emerging technologies and trends. Sign up at AbundanceHub.com to ensure you don't miss them.