THE BIRTH OF THERMODYNAMICS

THE FOUR LAWS
WITHOUT WHICH NOTHING WHATSOEVER
THROUGHOUT THE UNIVERSE THAT HAPPENS,
HAPPENS.

These Laws are, of course – you guessed it – the Laws of Thermodynamics, of which the First, Second and Third are familiar, when best remembered in the words of C P Snow:

So far it sufficed to know (at least among laymen like me) that this ‘absolute zero’ is zero K (the zero point in the Kelvin scale of temperature, or -273.15 °C in the familiar Celsius scale).   Peter Atkins in his book (shown illustrated in slide [A] below) relates the need for another law to describe the term ‘temperature’ in these words:

And therefore the need for the Zeroth Law -- zeroth, because the existing three laws of thermodynamics
“… are so well established that there was no hope of going back and renumbering them. As will become apparent, each law provides an experimental foundation for the introduction of a thermodynamic property. The zeroth law establishes the meaning of what is perhaps the most familiar but is in fact the most enigmatic of these properties:  temperature.”

“The zeroth law is the basis of the existence of a thermometer, a device for measuring temperature. A thermometer is just a special case of the system B that we talked about earlier.” 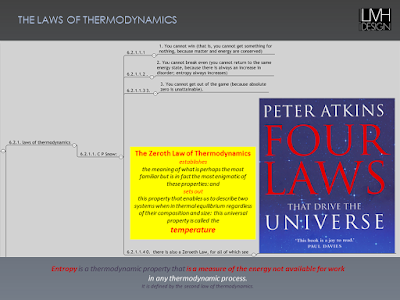 A footnote regarding the reporting of energy is also given by Atkins, and I think worth quoting here:

Shortly after I had prepared Slide [A] for a talk, I paid a short visit to Munich where I was dumbfounded by seeing what I meanwhile made into Slide [B], as part of an exhibition simply entitled RUMFORD (Count Rumford, Benjamin Thompson, 1753 – 1814).  This exhibition covered many aspects of life and work of this cosmopolitan multi-talent, equally at home in Boston, Munich, London (Fellowship of the Royal Society, 1781; founder of the Royal Institution) and Paris.

One of the displays on show was a scale model of his horse powered experiment to help clarify the relationship between energy, work and heat quantity.  An exhaustive and beautifully presented 370-page Quarto format book [RUMFORD, Rezepte für ein besseres Bayern (RUMFORD, recipes for a better Bavaria), Münchner Stadtmuseum & Hirmer Verlag GmbH, Munich, 2014; author: Thomas Weidner], accompanied the exhibition, from which the illustration in my talk slide [B] is taken. 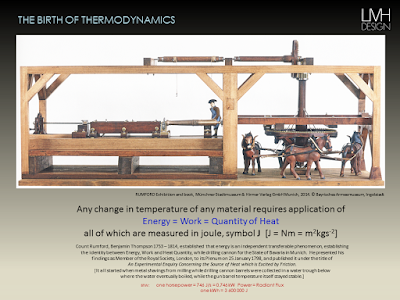 Let me quote this excerpt from the start of Thomas Weidner’s account of this of Count Rumford’s many experiments (my translation):

“From this best known of Rumford’s experiments he derived a proof that heat is a form of energy-in-motion which is still valid today. His researches brought a long-running dispute to end; it had started with the hypothesis that heat should be classified as a form of matter. This substance made the rounds at the time under names like ‘Caloricum’ or ‘Phlogiston’ in learned discussions. A leading proponent, among others, of this ‘caloric’ theory of heat was the chemist Antoine Laurent de Lavoisier (1743 – 1794) who believed that this proposed heat fluidum could be regarded as one of the chemical elements. It is one of history’s curiosa, that Rumford later married Lavoisier’s widow.

With this demonstration of the kinetic definition of heat, Rumford was instrumental in helping the opposite view to become the winner in this dispute. It was a fundamental concept underlying the development of industrialisation during the 19th century….”

Having been primed by Peter Atkins’ description and definition of the Zeroth Law of Thermodynamics before seeing this RUMFORD exhibition and then also reading Thomas Weidner’s detailed account of Rumford’s experimental setup and account of his meticulous records of thermometer readings, the thought occurred to me that this experiment could well be termed the Birth of Thermodynamics with this model as iconic reminder.

Rumford presented his experiment to the Royal Society in London on25 January 1798 under the title
An Experimental Inquiry concerning the Source of Heat which is Excited by Friction. I found it published as one of nine other of Rumford’s presentations in the collection by Sanborn C Brown: 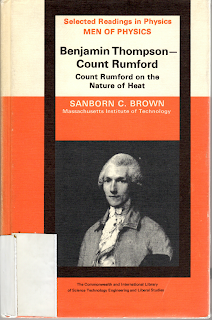 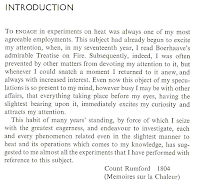 Rumford concludes his presentation to the Royal Society with these observations (as printed in the Society’s Philosophical Transactions):

“And in reasoning on this subject, we must not forget to consider that most remarkable of circumstance, that the source of the Heat generated by friction, in these experiments, appeared evidently to be inexhaustible.
It is hardly necessary to add, that anything which any insulated body, or system of bodies, can continue to furnish without limitation, cannot possibly be a material substance; and it appears to me to be extremely difficult, if not quite impossible, to form any distinct idea of anything capable of being excited and communicated in the manner the Heat was excited and communicated in these experiments, except by MOTION.
I am very far from pretending to know how, or by what means or mechanical contrivance, that particular motion in bodies which has been supposed to constitute Heat is excited, continued, and propagated; and I shall not presume to trouble the Society with mere conjectures, particularly on a subject which, during so many thousand years, the most enlightened philosophers have endeavoured, but in vain, to comprehend.
But, although the mechanism of Heat should, in fact, be one of those mysteries of nature which are beyond the reach of human intelligence, this ought by no means to discourage us or even lessen our ardour, in our attempts to investigate the laws of its operations…
“Nobody, surely, in his sober senses, has even pretended to understand the mechanism of gravitation; and yet what sublime discoveries was our immortal Newton enabled to make, merely by the investigation of the laws of its action!
The effects produced in the world by the agency of Heat are probably just as extensive, and quite as important, as those which are owing to the tendency of the particles of matter towards each other; and there is no doubt but its operations are, in all cases, determined by laws equally immutable.
Before I finish this Essay, I would beg leave to observe, that although, in treating the subject I have endeavoured to investigate, I have made no mention of the names of those who have gone over the same ground before me, nor of the success of their labours, this omission has not been owing to any want of respect for my predecessors, but was merely to avoid prolixity, and to be more at liberty to pursue, without interruption, the natural train of my own ideas.”

That experiment of Count Rumford has, no doubt – as in his explicit acknowledgement – had a long intergenerational and interpersonal gestation period, but his iconic experiment here described surely was the eventual ‘birth’ of the laws of thermodynamics, starting with his establishing the energetic equivalence of ‘Heat’ (in the parlance of the time) and Work, or in today’s parlance, the identity of Energy, Work and Quantity-of-Heat.

As a result of this re-acquaintance with the Four Laws – without which nothing in the Universe that happens, happens – I updated one of my blogsite excursions based on Oliver Morton’s book Eating the Sun.  This sequitur can be found at
http://cleanenergypundit.blogspot.co.uk/2014/06/eating-sun-fourth-estatelondon-2009.html 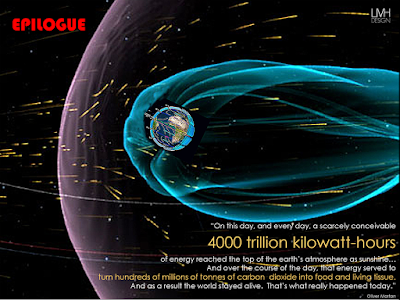 I count myself lucky that Amazon, with its wide net also embracing second-hand bookshops, has found Sanborn C Brown’s book for me.  Not only for being able to read Rumford’s own accounts of his work, but more importantly for the Preface by the editors of the ‘Commonwealth and International Library of Science Technology Engineering and Liberal Studies’ under whose auspices this book has seen the light of day in 1967. At the same time I am sad because the only reason that this book has found its way into the second-hand market is that a US university library released it from their collection.

Some excerpts from this Preface may explain my concern:

“The publication explosion in scientific literature had dictated such an economy of publication space that the periodical literature in physics at the present time is written in a peculiar type of clipped language and laconic style which conveys nothing but the bare outline of the scientific contribution…
“This has not always been the case and in the eighteenth and early nineteenth centuries the accepted scientific writings were often attempts at literary efforts which were aimed at being as interesting to the general public as it was useful to the professional natural philosopher…
“In this process of streamlining and making efficient scientific reporting, something of real value has been lost which shows up in many ways, including the currently popular image of the scientific endeavour as one of inhuman attention to ‘cold fact’ and the reputation of the scientific enterprise as one in which the scientist himself, as a human being, must never appear. The fact is, of course, that the scientist today is just as human as the scientist of 150 to 200 years ago but until we find some better way of transmitting scientific information than the present written scientific communication to cope with the information explosion of the modern scientific age, the current tendency will continue toward making the scientific paper less and less readable to more and more people…
“Count Rumford typifies much of the scientific enterprise of the eighteenth century. Few of the leading research scientists were trained professionals…. It was an age in which the learned society fulfilled the function of our present-day research laboratory and the scientific communication was written to be interesting to the general educated world…”

For the chance of any user of that university library [Gonzaga University]  to stumble upon this whole, more than two printed pages long editorial Preface, would have warranted its retention.  Their loss is my gain, and I am thankfully drawing attention to it here.